We live in an increasingly urban world.  Cities are growing at rapid rates, and the current methods of ground transportation are continuously declining in efficiency as populations increase.  An over-reliance on the automobile brings with it dependency on fossil fuels, volatility of gas prices and vulnerability of ground level transportation systems to natural disasters in coastal and other low-lying areas. The competition entry entitled SkyNET re-imagines the potential for the skyscraper as an elevated transportation network.  By implementing SkyNET Terminals in cities across the world, transport will become more cost-effective and energy efficient both within and between cities. Utilizing existing technologies and speculating on their potentials, SkyNET implements systems of magnetic tracking, pneumatic tubes and gyro-stabilizing travel capsules to transport large numbers of people in a short amount of time. 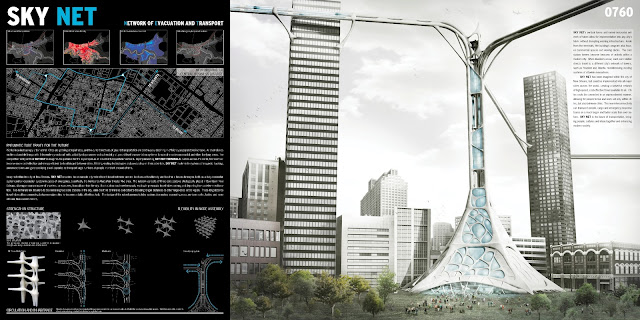 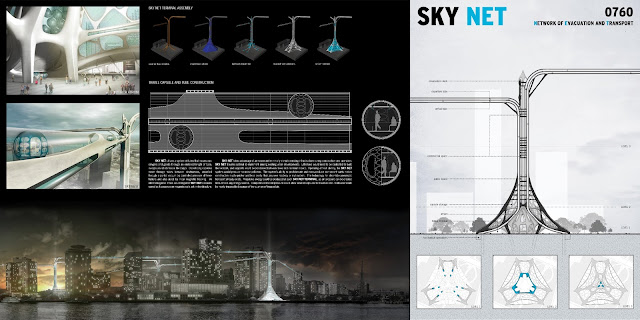 Imagined within the city of New Orleans, SkyNET provides this vulnerable city with efficient travel between specific locations within the city and to other cities in the region, both as a daily commuter system and an evacuation system in cases of emergency, specifically the hurricanes that often threaten the area.  The network consists of three core stations strategically placed in Downtown New Orleans, allowing maximum intake of travelers, or evacuees, from all points in the city.  Each station has three terminals, each with pneumatic travel tubes arriving and departing from a determined location.  Two terminals link travelers to the remaining two core stations in the city, while the third terminal is dedicated to traveling longer distances to other large cities in the region.  These long-distance travel tubes allow commuting between major cities to become a daily, effortless task.  The design of the raised pneumatic tube system also makes evacuating mass numbers safer, faster, and more efficient than current means. 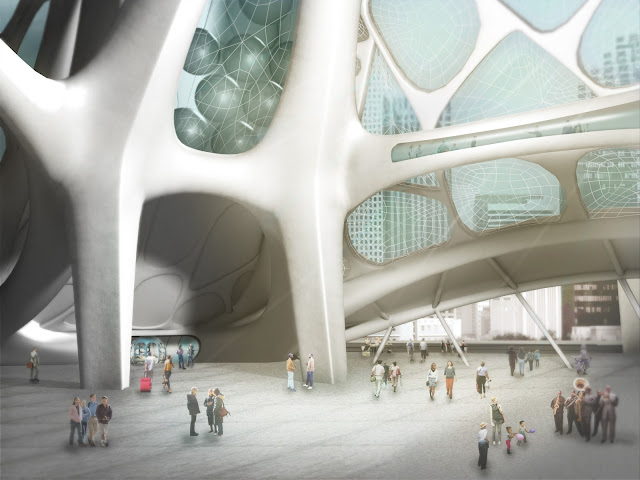 SkyNET utilizes a system of tubes that moves passengers and goods through an enclosed length of tube.  Close-fitting capsules move through tubes between destinations, propelled through a partial vacuum by controlled pressure differentiations and also aided by linear magnetic tracking.  An electromagnetic thrust would regulate capsule speed as it passes over magnetic coils set in the structure.

SkyNET takes advantage of air space and minimally disrupts existing infrastructure during construction and operation.  Little land would need to be dedicated to build the network, and supports could be positioned with minimal impact.  Operating almost silently, the SkyNET system would produce no noise pollution.  The system’s ability to pre-fabricate and mass-produce component parts makes construction much quicker and less costly than any new roadway or rail system.  Computer controlled pressure could allow several capsules to travel as one.  Collisions would be nearly impossible because of the cushion of trapped air. 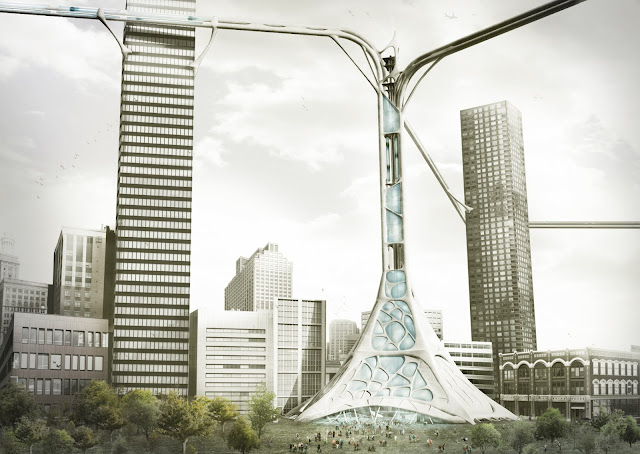 SkyNET’s vertical forms and raised horizontal network of tubes allow for implementation into any city’s fabric without disrupting existing infrastructure.  Aside from the terminals, the building’s program also houses commercial spaces and viewing decks.  The core station towers become beacons of activity within a modern city.  When disasters occur, each core station directs travel to a different city’s network of towers, such as Houston and Atlanta, revolutionizing existing systems of citywide evacuations.
SkyNET has been imagined within the city of New Orleans, but could be implemented into major cities across the world, creating a universal network of high-speed, cost-effective travel available to all.  Cities could be connected in an unprecedented manner, allowing for people to live and work not only within cities, but also between cities.  This new inter-connectivity can transport people, cargo and emergency response teams on a much larger and faster scale than ever before.  SkyNET is the future of transportation, bringing people, cultures and ideas together and enhancing modern society. 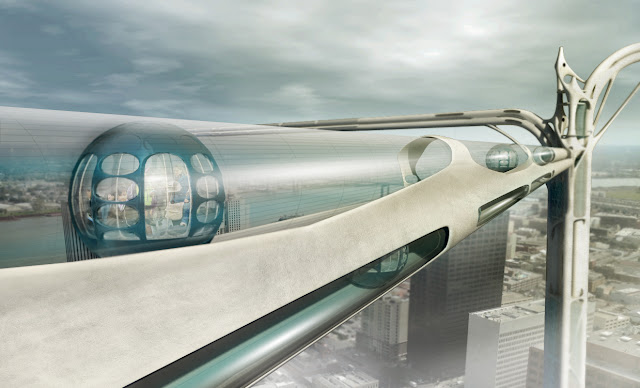 This project was created by James Catalano and Adrienne Trahan.  All images and text are property of these two parties and can only be reproduced or replicated with written permission.

This post was created to showcase our work and inspire others to explore their imaginations in collaboration with architecture for the betterment of humanity.

Posted by Unknown No comments: